Tips to Host a Soup Swap

It’s easy to feel “Been there, done that” when you get caught in the same loop of party themes. Luau, Hollywood… the list goes on! Hosting a soup swap is a creative and fun party idea that breaks out of that rut as well as a great way to make sure there is no lack of variety in your soup locker.

A soup swap is a gathering of "souper" friends sharing quarts of their favorite soup. Everyone goes home happy and with different soups than what they came with.

Here are some tips on hosting a soup swap.

Here are five great recipe ideas to get you started! 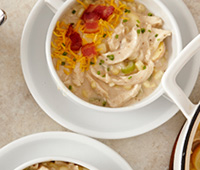 What to Ask Guests to Bring

Get the Party Going

Big Ideas for a Small Christmas

Fan Favorites for the Big Game

Get the Most from Your Bento Box

Reserve your seat at TheTable

Hi! Is there anything we can help you find?

YES. PLEASE! NO THANKS GET COUPONS! FOOD SAFETY
x